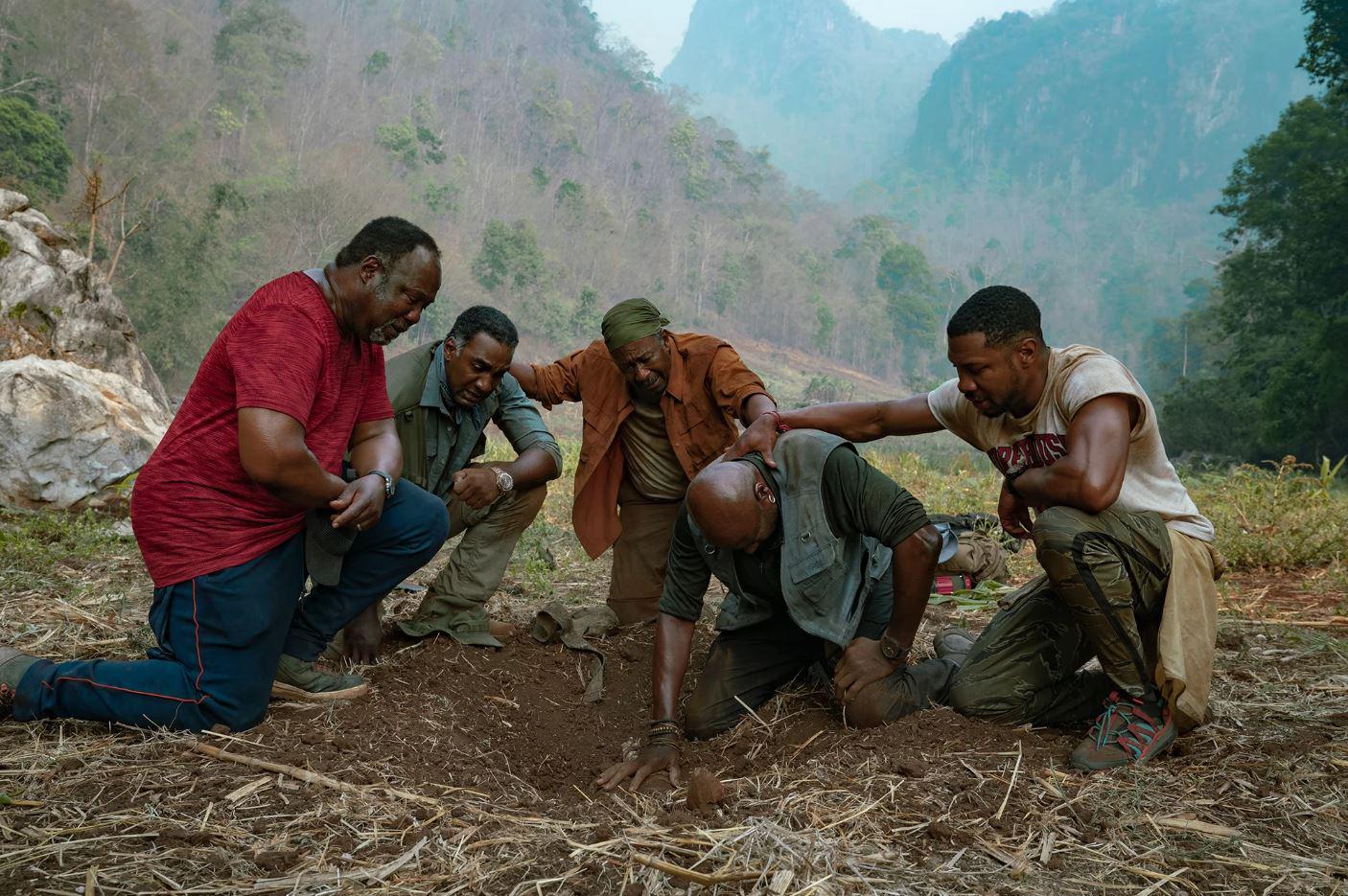 It’s funny that Spike Lee is considered a serious director.

And not funny in the sense that the perception is incorrect–he is most definitely a serious director, one of the great filmmakers of his era.

What I mean is that, given his iconic stature (present even in the distinctive, two-syllable punch of his name), it’s easy to forget just how much humor Lee packs into his movies.

Da 5 Bloods (for at least half of its 155-minute runtime) absolutely overflows with jokes, visual humor, allusion, puckish self-reference and meta-fictional asides.

As always, Lee demonstrates an affinity for the near-absurd and the exploration of weighty themes along a pop culture-magical realism axis (the Jordans hanging from a telephone line over a Vietnamese river is a sublime example).

When at his best, as he is for most of this very full meal of a movie, Lee’s fecund, multimodal style provides hook after delightful hook, snagging our attention at every opportunity: visually, through dynamic, clever scenecraft; aurally, by the use of music as motif (Marvin Gaye’s What’s Going On album in particular); textually, via a smart, snappy script, and of course, politically.

The remarkable thing is that, for the most part, it is also an extremely enjoyable watch.

I use that term often in these posts–an “enjoyable watch,” or a “fun listen.” To me, this is the highest compliment.

I can’t help it. I’m a pop culture guy through and through.

I’m all for art that is challenging or even difficult, but if you can say something and be entertaining, too, you have achieved the ultimate in my book.

I like Bob Dylan now and then, but I’ll take The Beatles any time of day, you know what I mean?

And Da 5 Bloods damn near achieves this kind of totality.

It is, in its own way, almost as galvanizing a movie-watching experience as Born On The Fourth Of July is.

All the humor and aesthetic winking of the first half is, of course, setup for an absolutely harrowing middle section and a grim final act that should come as no surprise, because Lee makes his use of genre tropes and cinematic reference very clear.

We all know how this story goes: gold does strange things to men’s souls.

My knowledge of film history and technique is not nearly deep enough to run down all of Bloods’ many cinematic quotations, though the most pleasingly overt references are to Apocalypse Now and The Treasure of The Sierra Madre.

They are references that had to be made and Lee’s direct nod to each film is a fun touch.

All the characters you’d expect to meet eventually arrive–an enigmatic local guide, a shady, panama-hatted financier, an old wartime flame, a group of American interlopers who may not be who they seem to be. The fun part is how Lee bends these stock elements to suit a sidelong look at modern American history.

Delroy Lindo is the film’s center and turns in a frayed, haunted performance that holds the ensemble together.

As is sometimes the case (IMHO) with Lee’s work, it goes a little long, overstating its point in certain places, but then again, they are, perhaps, points that warrant restatement.

I was going to say that this is a movie that speaks perfectly to our current moment. But you could say that about many of Lee’s movies and he’s been making them for nearly 40 years.

That is, I suppose, kind of the point.

I was reminded of the glut of Vietnam movies that hit cinemas in the late 70’s and early 80’s. Looking back, it seems that the Vietnam generation, upon reaching middle age, was trying to make sense of it all.

A decade or so later, as the World War II generation aged into elderliness, America’s cinematic focus shifted to that war and the gaze was adoring (this is a great visual recapitulation of how WWII nostalgia fed the U.S. military response after 9/11).

Now, as the Vietnam generation enters the championship rounds, as it were, I wonder if we will see more movies like Da 5 Bloods.

I wasn’t alive in the 60’s but it seems impossible to look at today’s America and its interconnected web of woes and maladies without thinking of that decade. Perhaps as we look back at the Vietnam era we will find clues about not only how we got here, but how to get out.

Earlier I mentioned Bob Dylan. Not always a “fun listen” (again, very much my opinion only) but usually a worthwhile one. In March of this year he released a 17-minute song called “Murder Most Foul,” ostensibly about John F. Kennedy’s assassination, but since it’s Dylan, really about so much more than that.

It’s an astounding 17 minutes. A scattering of the 20th century’s ashes and a prayer for us to rise from them.

I recommend you give it a listen.

(Puts on an episode of Seinfeld)

Da 5 Bloods struck a similar note for me. Spike Lee was born almost 20 years after Bobby Zimmerman and therefore speaks from a different historical position, but his message is similar.

And the presence of both men in the teeming, streaming sea of mediocre content in which we all swim these days is a reminder that giants–even ones who stand only 5’6” on a good day–still roam the earth.