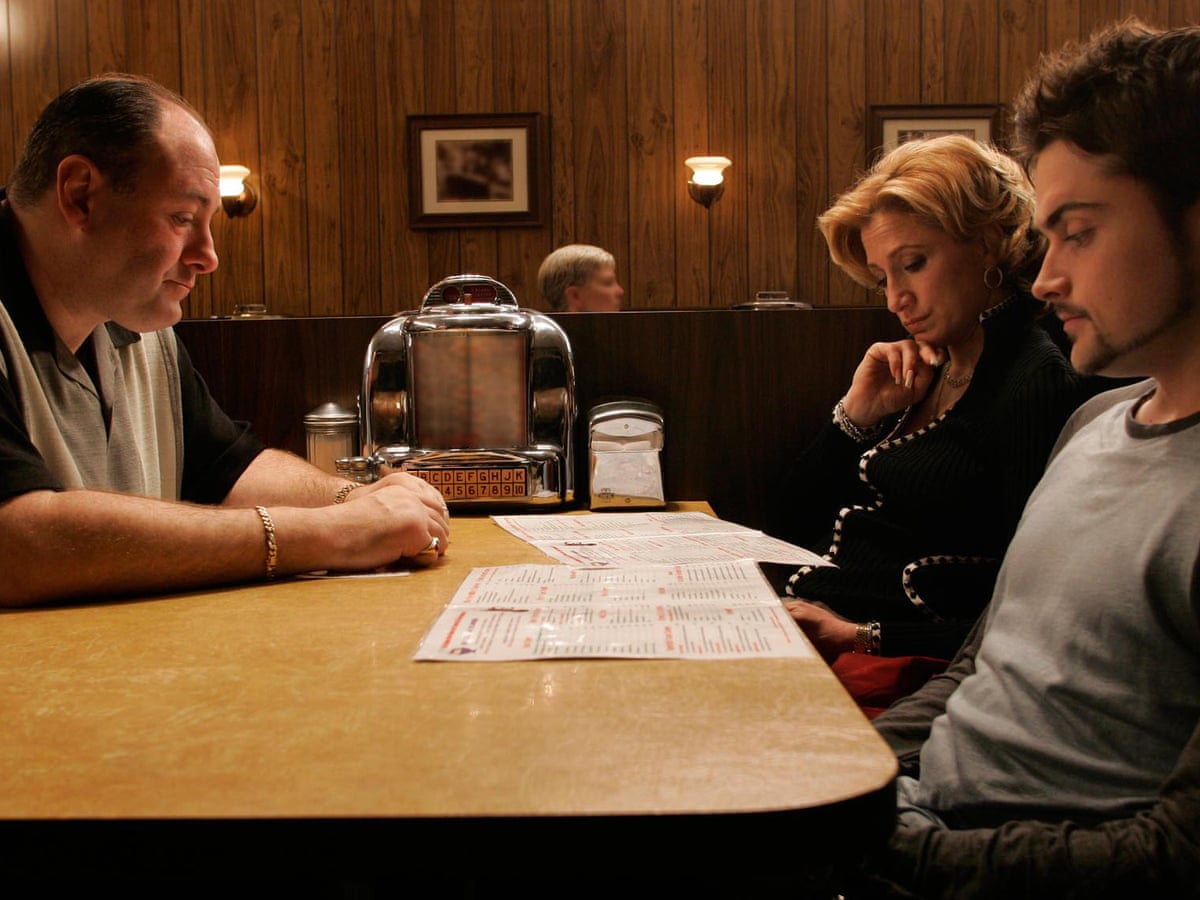 Okay Doc, here it is:

As if seeking further assurance of life’s meaninglessness during these trying times, I recently binged all six seasons of The Sopranos.

And hey, you know what’s funny? Twenty years ago, I thought this was a cool show about gangsters.

It gets under your skin, infects you with bleak realizations.

I made it to the vaunted finale on Friday.

It is now Sunday.

I have spent the past two days falling down dark, depraved Wikipedia holes. I’m not big on serial killer stuff, don’t even like horror movies. And yet, here I am, newly expert in the details of the most diabolical crime ever committed in the state of Indiana.

I just re-watched There Will Be Blood for the first time in 13 years. As though guided by dark spirits, my hand slowly reached for the Roku stick, pointed it at Daniel Day-Lewis’ terrifying mug and hit play: “The man with the black eyes and oddly menacing mustache…he’s got something to tell you…Listen! Listen!”

Like A.J. in Season 6, I’ve been swallowed by malaise, consumed by impotent fascination with the scale of the world’s cruelty.

I want to drink $600 Chianti straight from the bottle just to dull the pain.

I want to eat spaghetti and meatballs until I burst like the Gluttony guy in Se7en.

I want to be reborn in hellish form, like the titular character in Christopher Moltisanti’s magnum opus, Cleaver.

What can we make of The Sopranos in 2021, it being both the progenitor of two decades of Prestige TV and a fitting spiritual corollary to our present moment?

I think a good starting point is to remember that the show predates the streaming era and was never meant to be binged. Each show is a very full meal best suited to a week’s digestion [insert hacky Italian-a food-a joke-a here-a!].

And yet, one can’t resist the subtle impetus of finger to “next episode” button, ensuring another masochistic dopamine hit. I guess that’s because, bummer or no, The Sopranos is unquestionably a great TV show, perhaps the greatest ever made. It has the evergreen quality known only to great creative works: revolutionary in its inception, no less fresh or relevant in a changed creative and societal context. Its pervasive cynicism, black humor and grim depiction of capitalist food chains are more effective now than ever.

The dark gifts it gave us–acts of gruesome violence depicted with more than a touch of slapstick comedy, pervasive sex and nudity, and of course the celebrated anti-hero at the center of it all–have been wrought and re-wrought so many times since that the tools have all been dulled to ineffectiveness and the product has become boring and predictable.

These things happen. Post-grunge alternative radio was nothing but excruciating Eddie Vedder impressions for ten years. Tarantino both created and killed the hip crime genre. Tony Soprano gave us Breaking Bad, Mad Men, The Wire, Game of Thrones, House of Cards and more. Now go scroll through whatever the fuck is happening on Netflix. He gave us that–allllll that–too.

I think Breaking Bad and Game of Thrones may be The Sopranos’ most recognizable sons, although, like Charlie Sheen and Emilio Estevez, one ended up in a somewhat kookier place than the other.

I am tempted to think of Breaking Bad as the most direct descendant of The Sopranos. It takes one man as its focal point and traces his path to amoral criminality. It juxtaposes light and dark, humor and depravity. And yet, I don’t feel that watching Breaking Bad has ever left me this pessimistic about the human condition.

I think this is partly because Breaking Bad is, for the most part, about one guy. The Sopranos deals with institutions and enablers, structures and hierarchies. There seems to be an invisible but definite line dividing suburban, upper middle class Albuquerque from the underworld into which Walter White descends.

No such line exists in The Sopranos. Everyone is complicit, everyone is corrupt. Mom’s out to get you. So’s your uncle. So are your friends. Can’t trust the cops. Definitely can’t trust your co-workers. Even Artie Bucco is as narcissistic and self-destructive as his mafia associates–a guy can’t even get a decent meal in Soprano-land.

In this way, I think Game of Thrones ends up a fuller–and by ‘fuller’ I guess I actually mean emptier–bleaker, more nihilistic realization of The Sopranos’ aesthetic. In Westeros and North Jersey, the institutions of power are corrupt and meaningless. There is only power itself–the getting of it and the wielding of it against others. And boobs. Lots and lots of boobs.

Of course, The Sopranos’ specifics speak to us (me, anyway) in ways that the fantasy elements of Game of Thrones never can. We recognize the landscape (suburban consumerism, class striving, First World neuroticism) and the milieu (mafia saga). The Sopranos wove these elements together in a revolutionary way, at once hard realism and burlesque, absurdist comedy. Borderline Beckett stuff (“Pine Barrens” is gangster Godot, no doubt about it).

The very idiom of Italian gangster story is itself a bit of self-commentary, so fundamental to American cinematic storytelling had it already become by the show’s debut in 1999. It’s funny, if you stop and think about it, how a tiny, deviant fraction of a small, geographically distinct ethnic subgroup became the proxy for perhaps the most broadly appealing story form of the 20th Century.

It’s been talked to death, of course, the mafia story as dark reflection of the American Dream. The Sopranos took Goodfellas’ post-modern leanings and realized them in extended, novelistic form. The gangster story as commentary on America, but also commentary on itself, and by extension, its audience. It took Michael Corleone half of The Godfather to transform from college boy to killer. Tony does it–by hand, no less–in Episode 5, while on a college visit with his teenage daughter. Like another Roman Soldier of an earlier era, the show demands of us, early on:

Are you not entertained?!

And the answer is, yes, we were very entertained. So entertained in fact, that we eventually became bored. For twenty years, we saw nothing but anti-heroes and moral ambiguity, once-edgy artistic choices turned flabby, lazy, ineffectual.

There was some show called Boss on cable a few years ago. I tried to watch it. Kelsey Grammer played I think the mayor (?) of…Chicago? Maybe? A guy who–wait for it–presents one face to the public and another, far crueler one in private (cool hook, right?).

In one of the first scenes of the pilot, Grammer’s character does some smiley glad handing on TV and then berates an underling in private, grabbing the man by the ear, physically, violently humiliating him. That’s all I remember before I woke up with the remote in my hand and the credits rolling. Zzzzzzzzzzzzzzzzzz. Been there, done that, so so many times before.

Because as shaken to my core as I apparently am by The Sopranos, the other big revelation rewatching it provided was:

As a young man in 1999, I was perhaps too naive, too dense or too unsophisticated (probably all three) to clock just how funny this show is. It’s got jokes. It’s also got overarching existential humor. It’s got slapstick. It’s got irony.

And all these things are possible because it’s got writing. And the writing sings because it’s got great actors from top to bottom (in a New York production, you can always count on skilled theater actors bringing quality to small roles–I did a double take when Lin-Manuel Miranda popped up in a one-line role as a bellhop in Season 6) and the whole thing fits together so beautifully because of great direction and outstanding production design (Stevie Van Zandt’s wigs and suits deserve their own billing).

Now that we’ve talked it through, I’m starting to feel a lot better about this whole thing.

Maybe there’s something to this therapy stuff.

7 thoughts on “Guy Walks Into A Psychiatrist’s Office: Re-Watching The Sopranos”